Farming is a demanding but extremely rewarding activity. We are lucky to have a team of students and many volunteers from the community to grow with us! 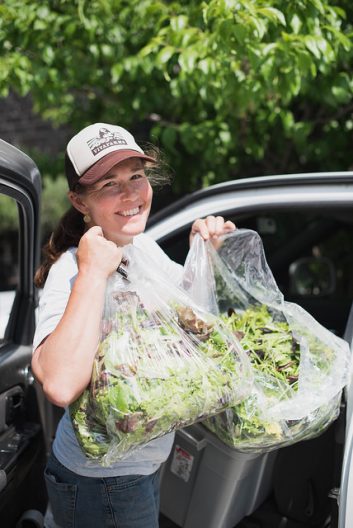 Persis “Perry” originally hails from Long Island, New York, but New England also has a special place in her heart. Perry owned and operated a commercial grass-based sheep dairy, making cheese, raising layer hens and growing vegetables in Union, Maine for 17 years. In addition to running her own farm, she has worked gutting fish at canneries in Alaska, earned a MS in Natural Resource Management and Public Administration, served as recycling coordinator for Chittenden County, Vermont, and was the shepherd and educator at a critically rare and endangered livestock breeding farm in Lincolnville, Maine.

In 2012, Perry sold her farm in Maine and moved to the PNW to pursue a second graduate degree, this time in education. Her goal is to be a farm educator to connect urban populations to the food system. Since earning her Masters in Education at UW in 2014, Perry has managed three student farms including Assistant Farm Manager at The Evergreen State College. She has taught classes in sustainable agriculture, food safety and urban farm and business planning and created student farms for Antioch University, and the Sustainable Agriculture Education (SAgE) certificate program at Edmonds Community College and Seattle Central College.

Perry was involved with the UW Farm as a graduate student and TA in The Urban Farm course (ENVIR 240), and while completing her master’s project with Seattle Tilth’s, Seattle Youth Garden Works program. She is very excited to be back again in her new capacity as the Farm Manager.

Favorite veggie or fruit that we grow at UW: tomatoes and lettuce 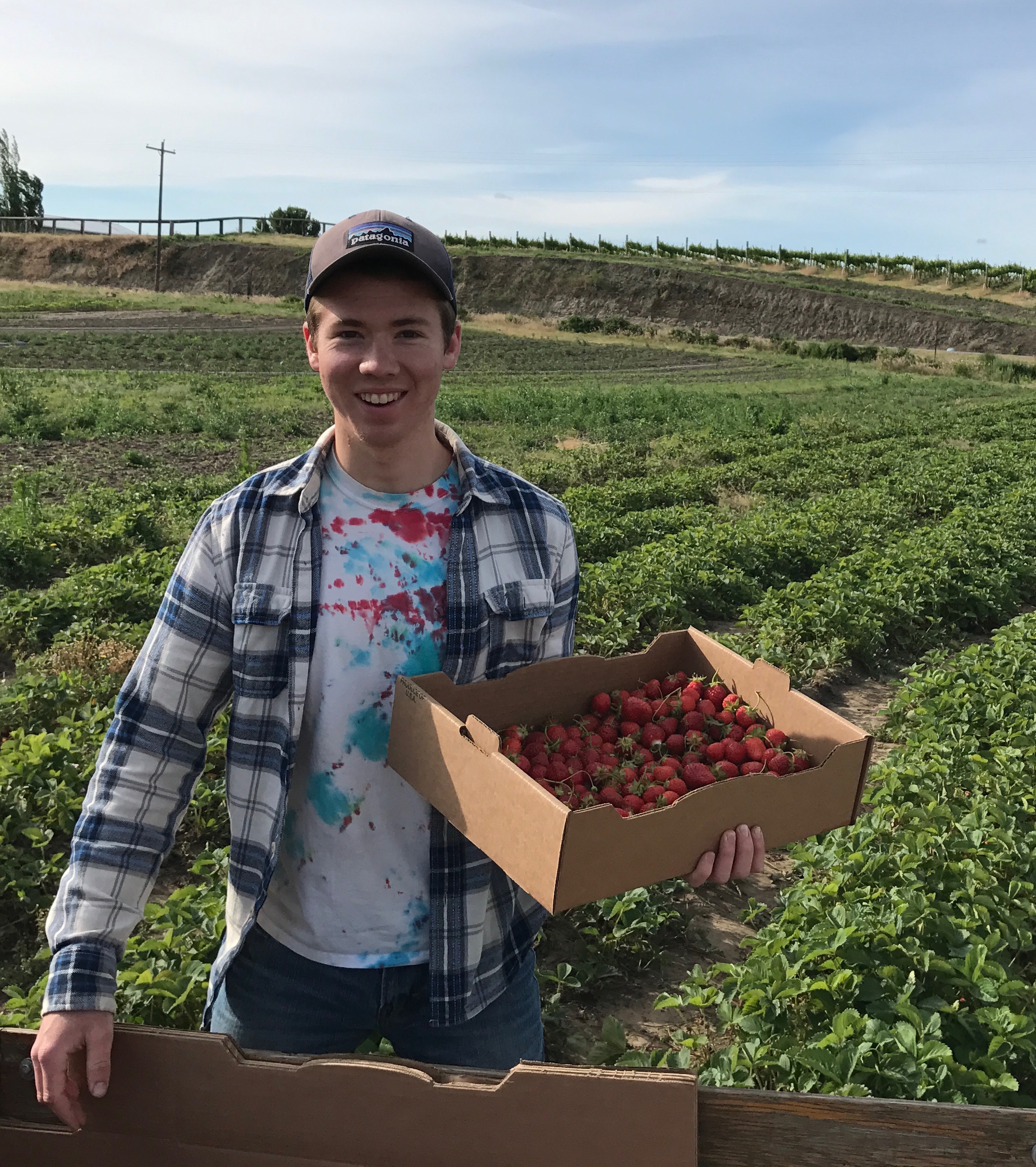 Our new Assistant Farm Manager for the 2020-2021 growing season is Griffin Cronk. Though Griffin’s primary focus will be field supervision, production, harvest and delivery to campus dining outlets and the CSA, he also communicates and organizes our volunteers.

Griffin grew up in Marin County, California, where he spent much of his time hiking and biking on the area’s many trails and ridges. Griffin’s interest in food systems originated in his food service background where he learned the joys of cooking and baking with local and nutritious ingredients. While in high school he volunteered at a nonprofit cooking meals for cancer patients.

He moved to Washington to attend Whitman College in Walla Walla, where he majored in Environmental Humanities and participated in the Glean Team and Alpine Ski Team. Between semesters, Griffin spent a summer interning at Welcome Table Farm, a certified organic farm that produces fruits, vegetables, and flowers for its Community Supported Agriculture program and the local farmer’s market.

Griffin settled in Seattle after completing his studies in May 2019. He is excited to combine his passions for urban farming, food security, and nutrition in this position as the Assistant Farm Manager at the UW Farm. 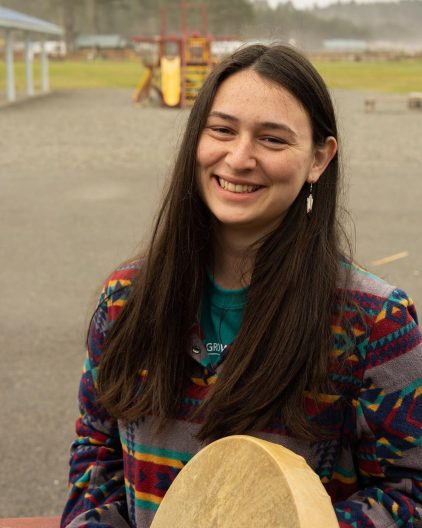 Sierra Red Bow is the new wǝɫǝbʔaltxʷ Food Sovereignty Liaison for the 2020-2021 growing season. She is a citizen of the Oglála Lakȟóta Nation, but she grew up as an urban Native in Virginia Beach, Virginia. She moved to Coast Salish territory to attend UW.

Sierra is a senior in American Indian Studies (AIS) and Environmental Science and Resource Management (ESRM). Her most vivid memory working at the UW Farm was getting knee deep in Lake Washington collecting muck to grow Wapato (also know as Broadleaf Arrowhead, or Duck Potato). She is excited to pick up the work of her Indigenous peers and continue to advance the food sovereignty movement on campus.

Through her position she advances the partnership between the wǝɫǝbʔaltxʷ – Intellectual House and the UW Farm that began in 2018. The wǝɫǝbʔaltxʷ – Intellectual House hopes to foster Indigenous foodways in a way that is not just environmentally sustainable, but culturally sustainable as well. Sierra believes it is critical for Indigenous peoples’ holistic health to not just have access to traditional foods, but also to have the means by which to grow food the way their ancestors have since time immemorial.

Favorite fruit or vegetable that we grow at the UW Farm: Ozette Potatoes 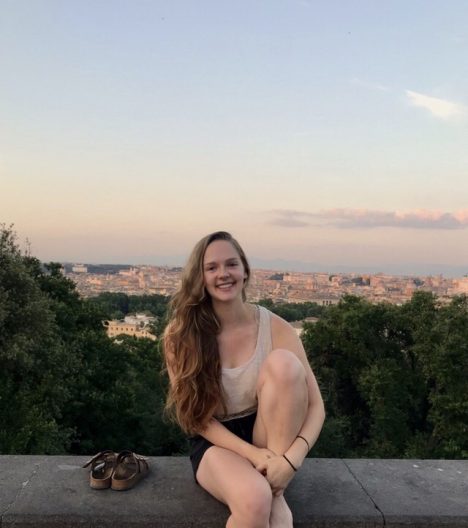 This is Mary’s first year as a member of the UW Farm team. Mary is a

junior majoring in Public Health with a focus in nutritional sciences and hopes to go into food systems policy or agricultural science. Her first introduction to the UW farm was during NUTR302, Harvest To Health – Lab.

Growing up in the remote town of Easton in Washington’s Cascade Mountains, she spent most of her time exploring the forest and lakes literally out her backdoor. In Seattle, she enjoys exploring the local farmers markets, running, and making sourdough bread for her friends.

Her personal interests in agriculture and plant biology led her to apply for a position at the farm, and she is very excited to be a part of the team this year! 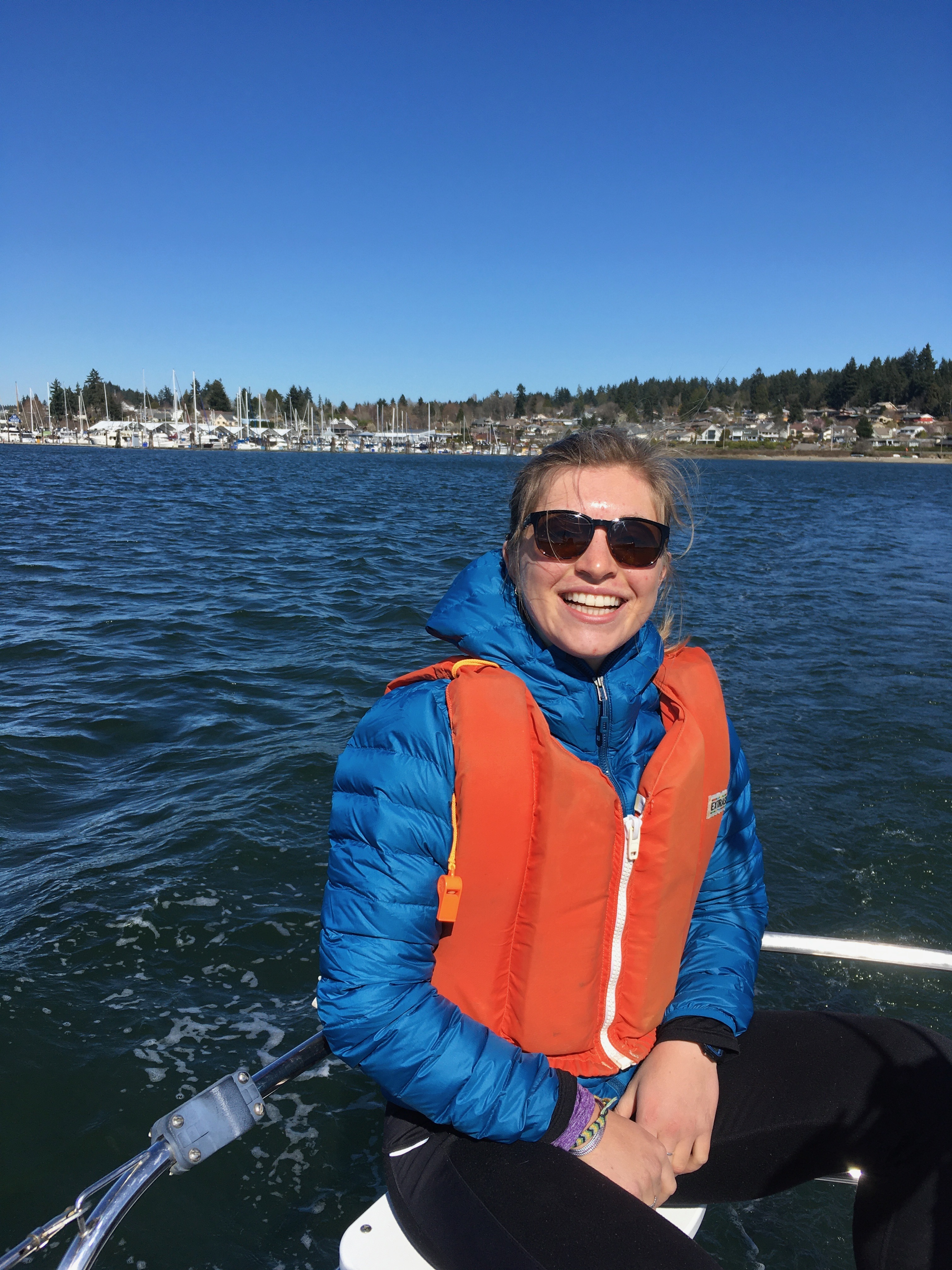 Naomi is a junior at UW majoring in Food Systems, Nutrition, and Health and minoring in Spanish. She got involved with the UW Farm by joining the UW Farm club, The Dirty Dozen and volunteering on the farm. She is interested in sustainable food systems and the intersection of human health and the environment. Naomi loves working with people and thinks she wants to go to nursing school after she graduates from UW.

In addition to working on the farm this growing season, Naomi will help manage the farm’s production data and calculate pounds of produce sold to Housing and Food Services and on-farm research.

In her free time she likes to spend time outside or enjoy a good meal with friends! 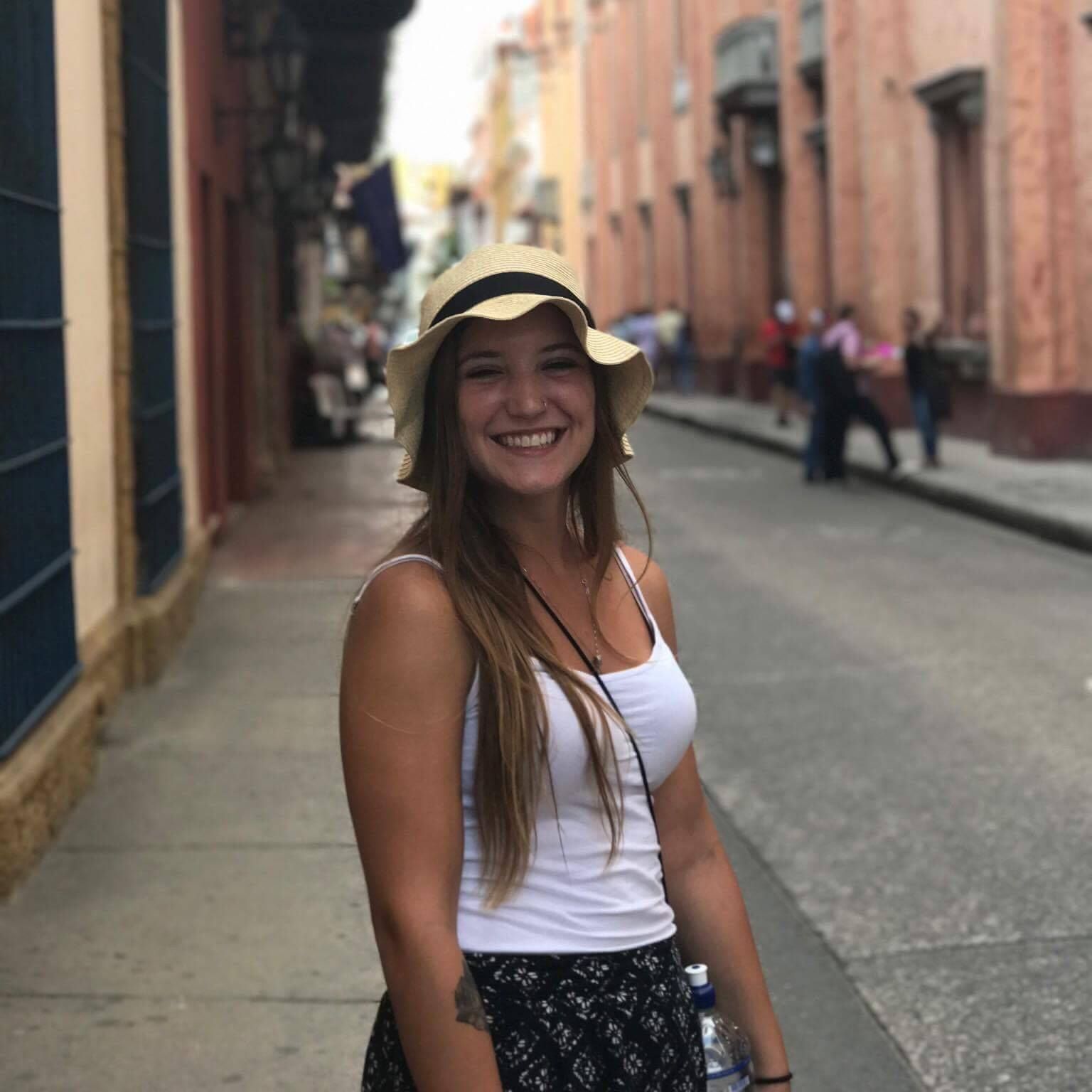 Krista Einarsson is a Senior and an Environmental Studies major. Her primary focus is sustainable agriculture and food systems.

Krista was first introduced to the farm through The Urban Farm, ENVIR240 course taught by Eli Wheat, Program on the Environment, College of the Environment.

It was during that course last spring, that she found her passion for digging in the dirt and growing food. Since then, she has taken Agroecology, other sustainable food system classes, and has volunteered at the farm. She is also completing a capstone project at Oxbow Farm this summer on her days off at the UW farm.

When she is not working at the farm or tending to her home garden beds, Krista enjoys spending her time hiking with her dog or kayaking around Lake Washington.

Krista is taking on the role as our new CSA manager as well as working in the field. She will be communicating with shareholders, organizing records, tracking produce in each CSA box and creating new signage for pick-up locations to help shareholders stay safe and healthy during COVID-19.

Year at UW: Senior
Hails from: Mukilteo, WA
Hobbies: Hiking, kayaking, and playing in the dirt
Favorite fruit or vegetable that we grow at the UW Farm: Bok Choy 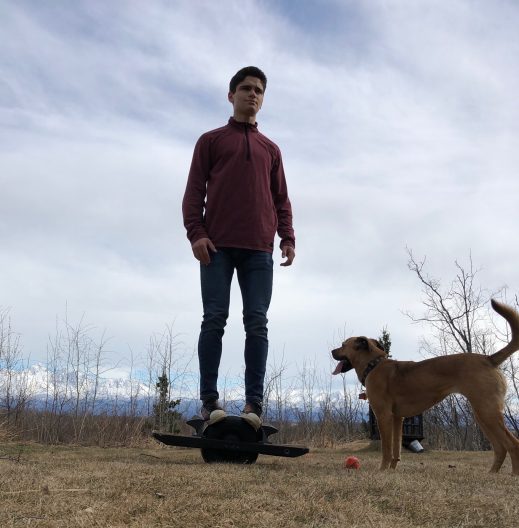 Peter joined the farm team in June. He was raised in Wasilla, Alaska and is beginning to fall in love with the city of Seattle. Currently undecided, Peter will be a sophomore at UW starting in the fall.

Through his ENVIR 100 Service-Learning experience and new friends made his freshman year, Peter discovered the UW farm, amazing staff, and comforting atmosphere, which led to his applying for a position his first year at UW. Peter’s focus, in addition to field work, is to help care for the wǝɫǝbʔaltxʷ – Intellectual House Native Garden while the volunteer program is restricted due to COVID-19.

For the past 7 years Peter had been working at his local bicycle shop where he coordinated fat-tire bike rides, sold bikes, and maintained the local skate park. Peter’s upbringing around bicycles and fascination in unique forms of transportation have led to his latest obsession: the one-wheel.

You will find Peter either on the streets cruising on his one-wheel or at UW farm with a noticeable farmer’s tan, dirty hands, and a mouthful of sugar snap peas.

There’s a lot that goes on behind the scenes at the UW Farm, and we’re grateful for all of the volunteers who help keep things running! If you’d like to volunteer with us, get info here. 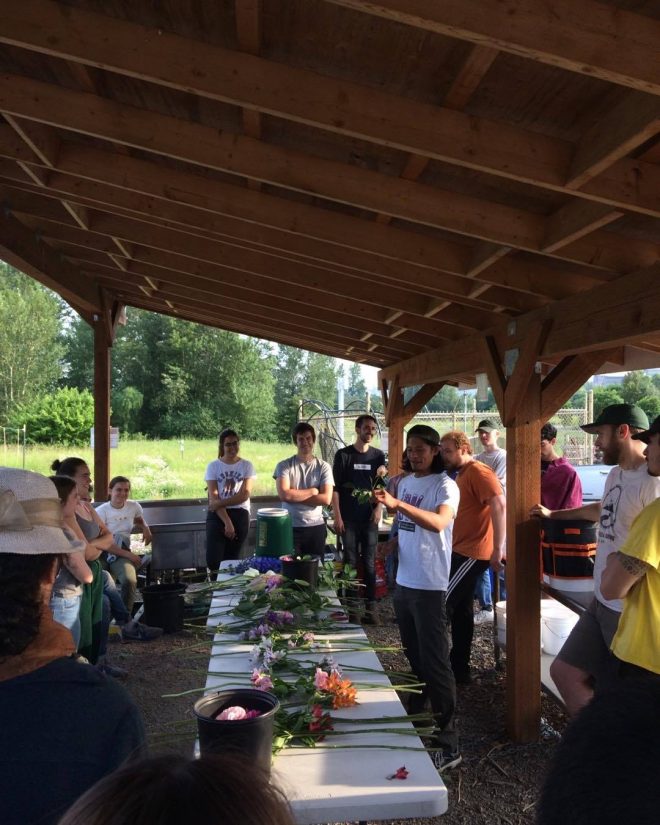 Inspired by tropical fruits and flowers since he was a child, Rizaniño “Riz” Reyes is a garden consultant and floral designer in Seattle, Washington, known for creatively embracing horticultural diversity with a sophisticated style that belies his 30-something years.

His early passion for plants led him to the University of Washington (UW), where in 2006 he earned a degree in environmental horticulture and urban forestry with a specialization in public horticulture.

He then worked as a horticulturist at the UW Botanic Gardens Center for Urban Horticulture for several years, as well as operating a small nursery on the side where he propagated rare and unusual plants for Northwest gardeners.

In 2015, he took on his current role as gardens manager for the brew pub and hospitality company McMenamin’s Anderson School in Bothell, Washington. 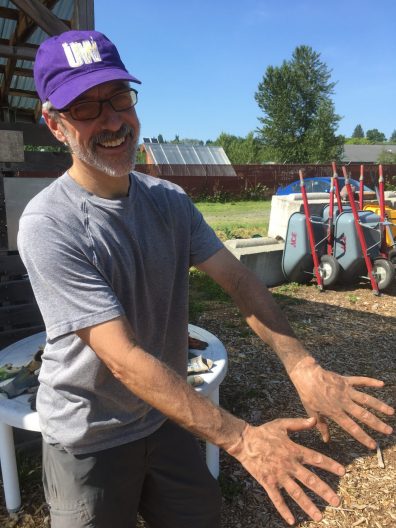 Ken moved with his wife Karen to Seattle from Massachusetts in 2016. He left a career in teaching science at public and private middle schools schools and now works teaching and coaching soccer in the Seattle area. In his spare time he volunteers at the farm, bringing that east coast energy and humor that makes physical farm tasks more enjoyable for everyone. Last year he was recognized at the annual Farm To Table event for the amount of hours he contributed as well as his advice and support to students as they navigate university life.

2020 marked his third season volunteering. This year Ken leads groups of students and volunteers in the “big work” jobs.