Azalea Way is the most iconic feature of the Washington Park Arboretum.  Azalea Way was developed beginning in the late 1930s and is a key feature of the original Olmsted Brothers design.    It is a 3/4 mile long level walk through the heart of the Arboretum, featuring azaleas, flowering cherries, dogwoods, magnolias and companion plants, set against a backdrop of evergreen trees and second growth conifers. The Seattle Garden Club sponsored the design and the initial plantings of thousands of azaleas in 1939.  Many other groups continued with support over many years of plantings.

Azalea Way traces its origins to the original skid road used to log the surrounding forest in the late 1890s.  After the city acquired the land, the road became a speedway used for horse riding and racing.  When developing the plan for the Arboretum, the Olmsted Brothers recognized its potential and turned it into a wide grassy promenade set off on either side by flowering plants and views to the rest of the Arboretum.  It was designed to be the signature feature of the Arboretum and that is what it has become.  Over the years plantings have been added and the poor drainage of the site has been mitigated, but it is still much the same as was envisioned over 80 years ago.  Every spring visitors flock to Azalea Way, and it is one of the Seattle area’s favorite Mother’s Day destinations. 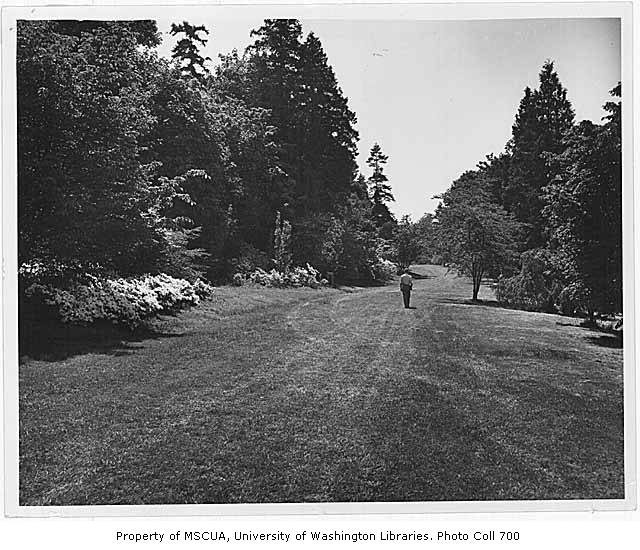 Near the south end of Azalea Way and at the foot of Rhododendron Glen is the Centennial Garden.  Located just north of the Azalea Way pond with a view of the Lookout Gazebo to the south, this was a project funded in large part by the Seattle Garden Club in honor of their 100th anniversary in 2017.  The Centennial Garden features many summer-interest plants, including roses, hydrangeas, and spring and summer blooming perennials.  There are several examples of Hydrangea paniculata ‘Jane’ [Little Lime], drifts of the dwarf selection of the oakleaf hydrangea (Hydrangea quercifolia ‘Pee Wee’), along with masses of Hydrangea serrata ‘Blue Deckle’ and two varieties of Hydrangea macrophylla, ‘Atona’ and ‘Sumida-no-hanabi’ [Shooting Star].  The rose Flower Carpet® Amber flowers several times during the summer in large drifts, and Geranium Rozanne™ (‘Gerwat’) flanks the large stone seat wall that provides views of the pond and the Lookout at the top of the valley.   It is a great place to view ducks and turtles enjoying the pond as well as the green of Azalea Way and the surrounding glen. 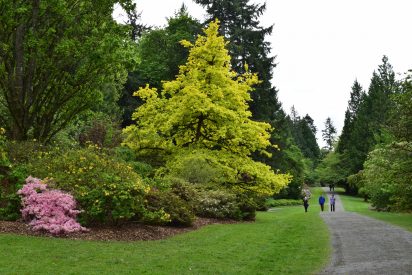 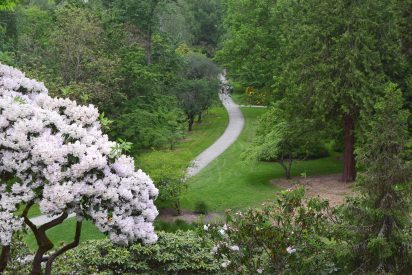 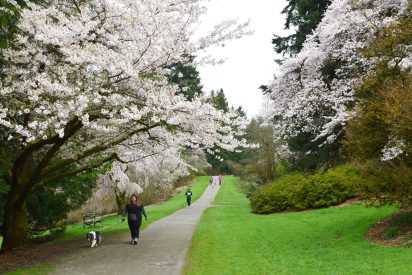