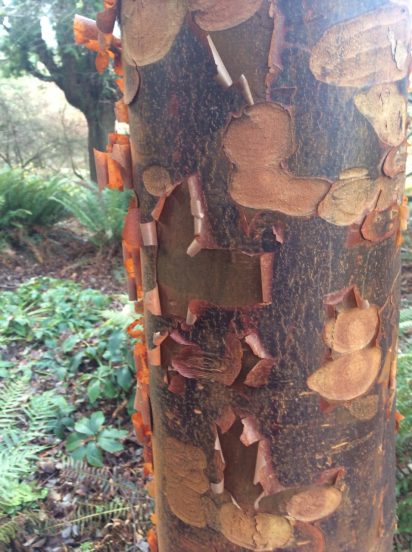 As we approach winter and the leaves are off the deciduous trees, we have an opportunity to see the forms of trees and their bark.  Some tree barks are just gorgeous and really add to a landscape’s appeal.   Many of the trees in the Joseph A. Witt Winter Garden are planted specifically for their ornamental bark.

Bark is the outermost layer of a tree or shrub; botanically it is called the ‘periderm’ or ‘outer skin’.  It consists of two basic layers: the cork cambium, the outermost and oldest layer of dead woody tissue (lignin), and the secondary phloem, or most recent layer of inner bark just outside the vascular cambium  Each year the inner phloem creates a new layer by cell division, creating a new layer of bark from within the tree – just as the xylem creates a new inner layer of heartwood and creates a yearly ring by which we can date the age of the tree.

Bark serves to protect trees against damage from animals, diseases and fire.  Bark can also contain antibacterial and fungal compounds that protect against attacks that would cause decay within the organism.  Many of the trees featured in this article have outer bark that exfoliates regularly. 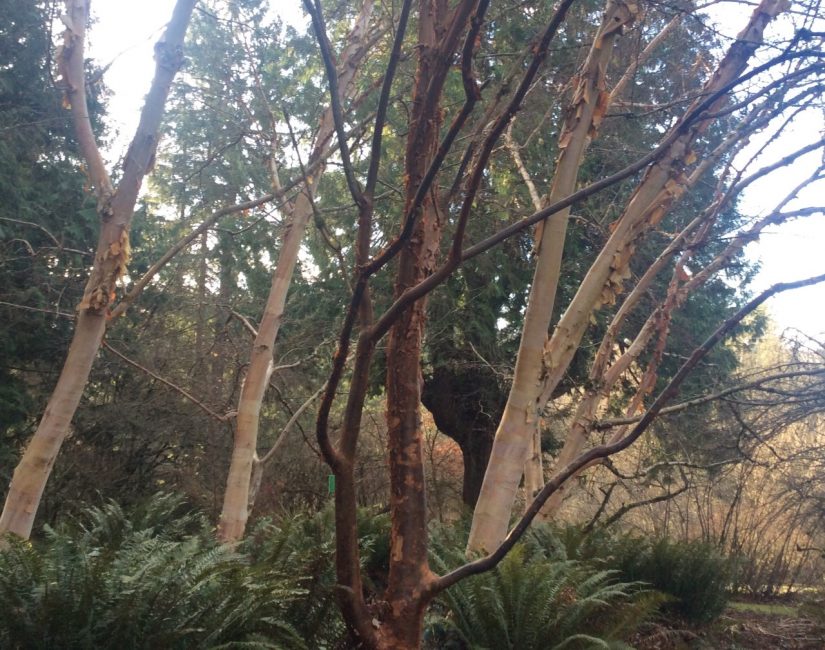 One of the nicest plantings in the Witt Winter Garden is Bed D which houses five Betula albosinensis var. septentrionalis  (264-88*A), Chinese red birch, with one Acer griseum, Paperbark Maple (240-88*A).  The Chinese red birch have pinkish orange bark and the Paperbark Maple features a dark cinnamon color for a wonderful complement/contrast.  They are both exfoliating trees, and when the sun is behind them it lights up the colors in the strips of bark hanging off the trunks and limbs. 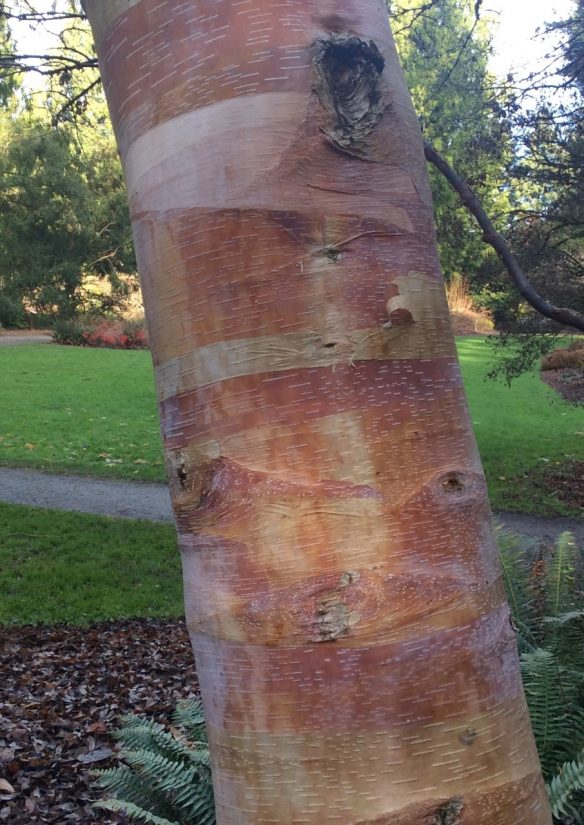 Across the lawn, the Stewartia monadelpha (located in Bed M) also features a dark cinnamon color which is complemented by the winter blooming Cyclamen coum groundcover surrounding the tree. 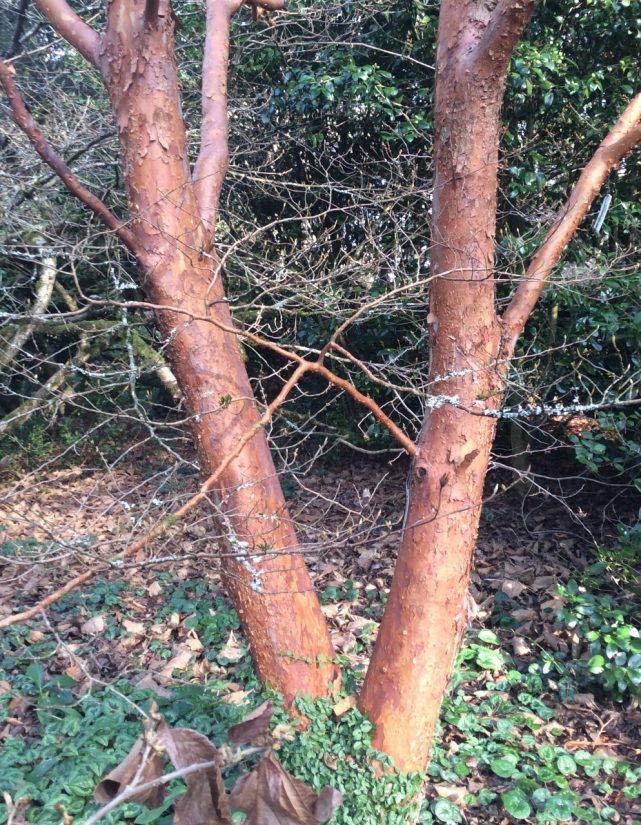 Another stunner is Acer tegmentosum ‘Joe Witt’ (30-12*A), a selection of the Manchurian snakebark or stripebark maple, which is native to China, Eastern Russia and Korea.  This cultivar was named for the Washington Park Arboretum’s former curator who had a special interest in the Winter Garden that was to later bear his name.  This cultivar of A. tegmentosum has the most defined striping with very white striations contrasting with the olive-green striations.

The crape myrtles also feature mottled bark that can provide a lovely winter interest.  We have several cultivars of crape myrtles in the collection. At the north end of Azalea Way is a stand of three tall Lagerstroemia ‘Muskogee’ (78-87) that have a subtle mottling of ivories and tans.  It never fails to catch the eye of our tour attendees. 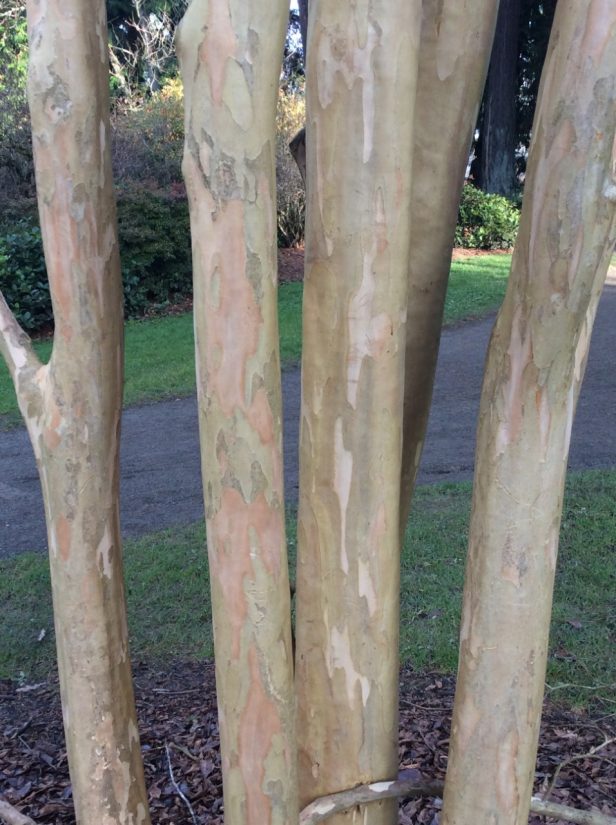 Most of the trees featured in this article will be shown during our January and February First Thursday Educational Tours. Please join us or locate these trees on your own when walking in the Washington Park Arboretum this winter.  Other tree species in our collection that are not featured here, but are also stunners for their bark are: Eucalypts (several in grid squares 7-4E and 5-5E), Pinus bungeana (237-48*B) and Stewartia pseudocamellia (1547-45*A). 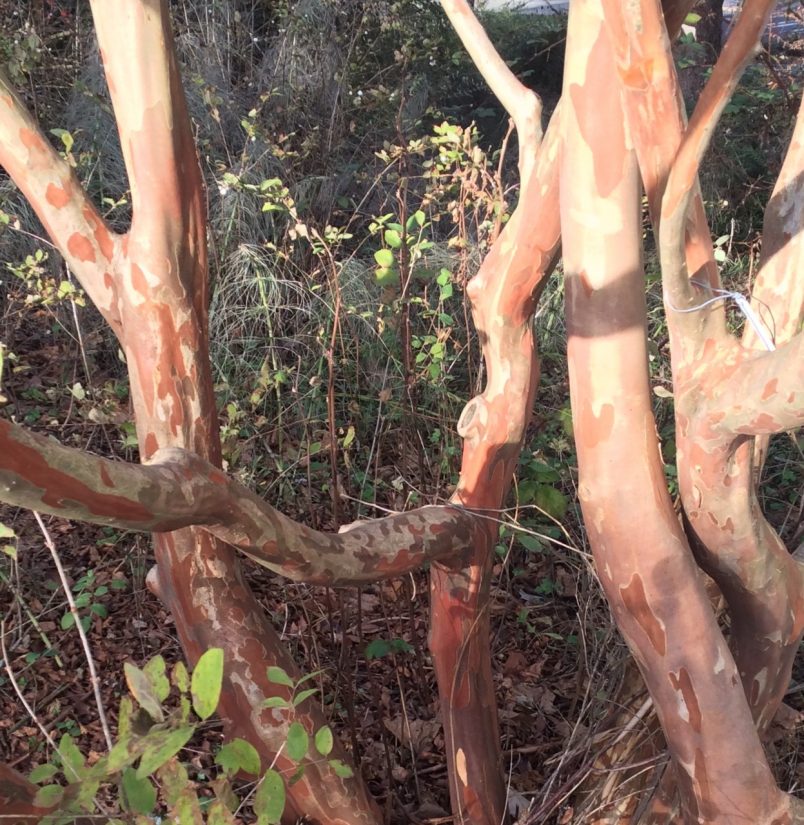