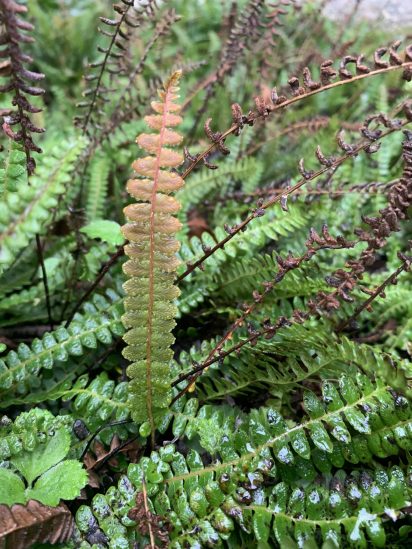 Oftentimes it feels like flowers get all the attention! Or perhaps at this particular time of year when we are ushering the seasonal shift into autumn it is leaf color that is at the forefront of people’s botanical musings. That is all well and good, but for this month’s Plant Profile I am diverting your attention downwards to a diminutive, evergreen fern that looks cute all year: Blechnum (Austroblechnum) penna-marina.

While not necessarily eye catching in all the traditional ways, this is a stalwart and useful fern! There is some variability in this fern but even at its tallest it is short, growing to only about 20 cm max. It spreads slowly to form prostrate patches that are fairly dense, but unfortunately not quite thick enough to totally suppress other weeds popping through from time to time. Like many ferns in the genus Blechnum it has dimorphic fronds, which means there are two types of fronds (fern leaves) that look different and serve different purposes. There are sterile fronds, which are leathery, deep green in color, and tend to be more prostrate. Like all other leaves and leaf like structures they perform photosynthesis, providing the fern with energy (a quick reminder that never ceases to amaze me– plants can’t eat so they make their own food from sunlight, water, and CO2)! The other fronds are “fertile” fronds, which are unique to ferns. They are darker in color and more upright. In her description local fern expert and nursery owner Judith Jones compares the fertile fronds of Blechnum penna-marina to “suspended pagodas.” In addition to looking interesting, the fertile fronds are responsible for the very important job that is producing and dispersing spore. Ferns fling spores, or teeny packages of their reproductive material, around in the hopes they’ll land in favorable conditions and produce sperm and egg that will be fertilized and grow into more ferns.

Regardless of structure and function, the textural element this fern adds to the garden is undeniable. In spring the freshly emerged sterile fronds of Blechnum penna-marina have a distinct coppery and sometimes deep reddish hue to them. You can cut back old tattered fronds in late winter to make this new growth extra apparent, but this isn’t necessary. Blechnum penna-marina looks especially nice growing under and among perennials or shrubs and in pots. It is borderline hardy to USDA zone 6. In cool moist locations it can thrive in sun, but it tends to appreciate light shade in hotter locations. It will be denser and more compact grown in sun and can get scraggly in deeper shade. It prefers moist but well draining soil, although it is surviving and slowly expanding in some areas of heavy clay at the Arboretum. It can also creep into cracks and crevices and thrive in rocky situations. All in all, it is an easy to grow, tough, and adaptable fern. 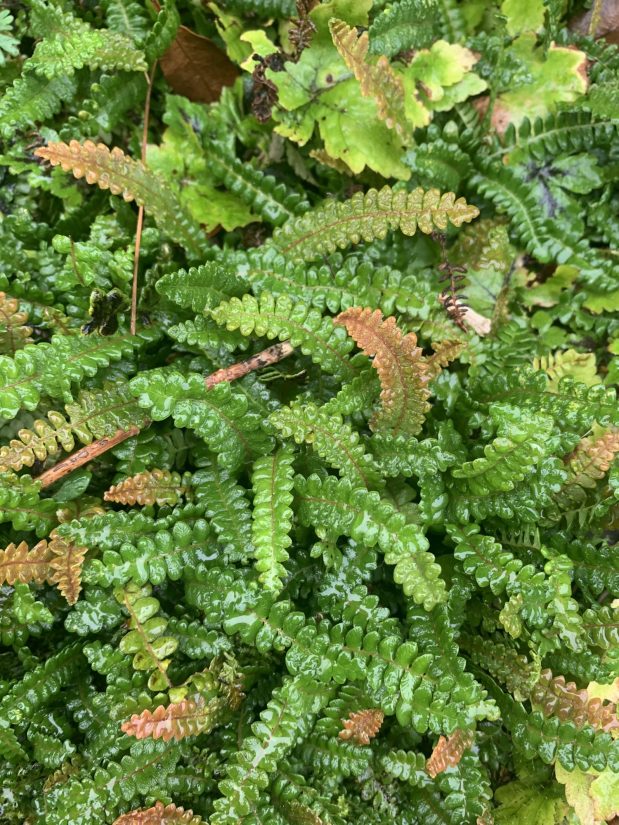 There are many plants that span across much of a latitudinal region of the entire globe. However, the wide yet specific southern geographic distribution (circumaustral) of Blechnum penna-marina begs the question of how it came to be found in such distant locations. In fact, Blechnum penna-marina is just one of the distinct taxonomic similarities between South America and Oceania; there are several other related genera and species, such as Aristotelia or Podocarpus, that are commonly found in South America, New Zealand, and Australia. There are also floristic parallels between the continents that are based on similarities in the genera and families that comprise each flora. There are two prevailing hypotheses as to why there are plants, including Blechnum penna-marina, that occur across such wide geographic ranges in distant continents. The first is the vicariance hypothesis, which suggests the disjunction is due to the physical fragmentation of the previously contiguous Gondwanan supercontinent; i.e. the species’ geographic range was split, and populations drifted apart as tectonic plates shifted and land masses separated. The other theory is dispersal, which suggests that rather than a slow geographic separation, it is the dispersal of plant propagules across large distances for long periods of time that results in the co-occurrence of species and the other floristic parallels across such distant continents. In other words, seeds or spores or pieces of plants from South America floated or were carried by the wind to New Zealand, and vice versa. I am unaware of a specific theory for the origin of Blechnum penna-marina, but it is generally accepted that a combination of these factors led to the similarities in plants of the Southern Hemisphere continents. To add even more intrigue, in their book The Pteridophytes of Mexico published in 2004, John Mickel and Alan Smith were the first to report disjunct populations of Blechnum penna-marina growing in the Northern Hemisphere! Fern populations growing in the northwestern Mexican states of Chihuahua and Durango had previously been identified as a different Blechnum species were determined by the authors to in fact be indigenous populations of Blechum penna-marina growing 4,000 miles north of the fern’s northerly most occurrence in Peru! 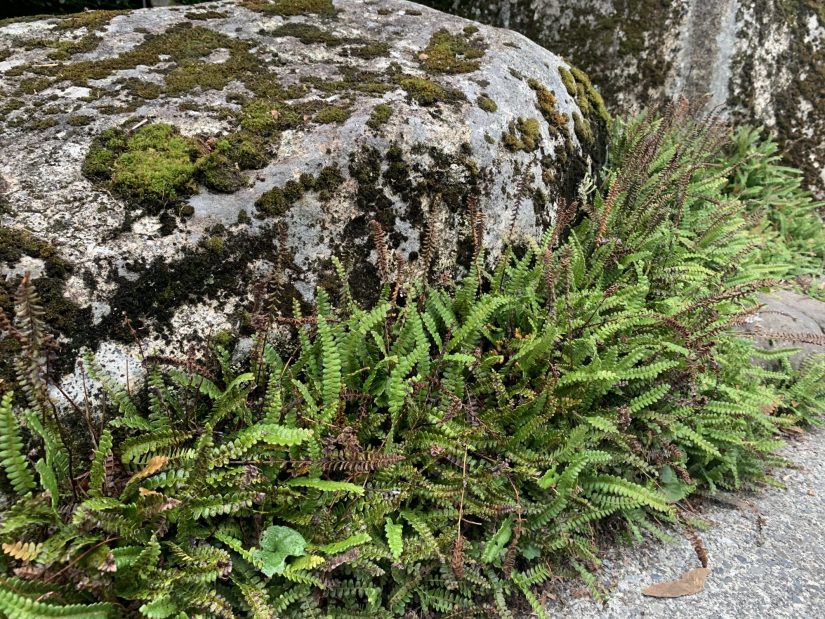 Blechnum penna-marina is known to many cultures and therefore goes by multiple names. Let’s start with the scientific name, which in this case if derived from Greek and Latin.  Blechnum is from the ancient Greek word for fern. Penna-marina is derived from the Latin for sea (marinus) pen (penna) or sea feather. Sea pens are small aquatic invertebrate animals, some of which do bare some resemblance to the fronds of Blechnum penna-marina. In Chilean Spanish the fern is known as Pinque. In English the common name is Antarctic hard fern or alpine water fern. I was unable to find any traditional names for this fern from Australia, New Zealand, or other Pacific Islands, but I’m sure there are many.

In line with its large geographic distribution and impressive tolerance of variable garden conditions, Blechnum penna-marina can be found growing in many different locations and situations at the Center for Urban Horticulture (CUH) and Washington Park Arboretum. Notably, it is a key feature of the ground cover medley planted in the Fragrance Garden at the CUH. You can also find it growing in the Pacific Connections Garden, as it is part of the native flora of three out of the five ecoregions featured in those gardens.  Remember to look down occasionally so you don’t miss this little fern the next time you visit the University of Washington Botanic Gardens. 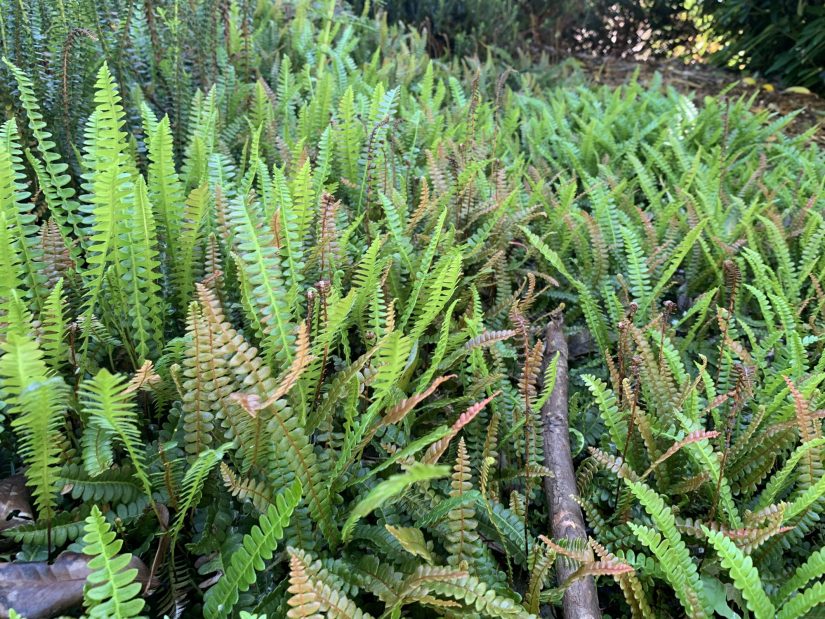