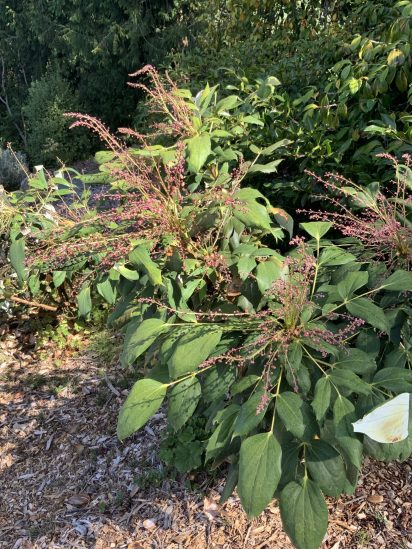 For nearly 20 years Mahonia gracilipes has been one of my favorite plants. It has many of the features I admire in a shrub—attractive flowers in an unusual color compared to others in a genus, bold leaves with interesting color and texture, many seasons of interest, and relative ease of cultivation and ability to stay in bounds. I have long admired Mahonia, with two common Seattle area natives—low Oregon grape (Mahonia nervosa) and tall Oregon grape (M. aquifolium)—being familiar from local landscapes from my youth. The genus is part of the larger Berberidaceae with barberries, Epimedium, Nandina, Podophyllum and our native vanilla leaf (Achlys triphylla) among several familiar to gardeners. I was never quite comfortable with the botanical reclassification of Mahonia into Berberis some decades ago, and recent DNA work has again suggested splitting most of them apart. And my general aversion to plants with thorns has led me to appreciate Mahonia species far above most traditional Berberis!

Mahonia gracilipes hails from Sichuan Province and northeastern Yunnan Province in China, and I first became familiar with it at Heronswood Nursery around the turn of the 21st century. While it was described by westerners in 1887 from a specimen collected by Ernst Faber on Emei Shan, it was only introduced to western horticulture in 1980 by Roy Lancaster to the United Kingdom and H. van de Laar to Boskoop in the Netherlands. It wasn’t popularized in the United States until much later. Dan Hinkley of Heronswood collected the plant on Emei Shan in 1996, offering it for sale in the Heronswood Nursery catalog in 1999. I purchased one at that time and planted it in my parents’ garden, where it has thrived in partial shade (and no supplemental water) ever since.

It was very hard to find for many years, and I remember procuring small plants for my former UW garden in 2008—after finding out that all the larger plants in the area had been scooped up for the new Pacific Connections exhibit opening that year in the Arboretum! But in recent years many specialty nurseries have offered it regularly and it has become much easier to find. 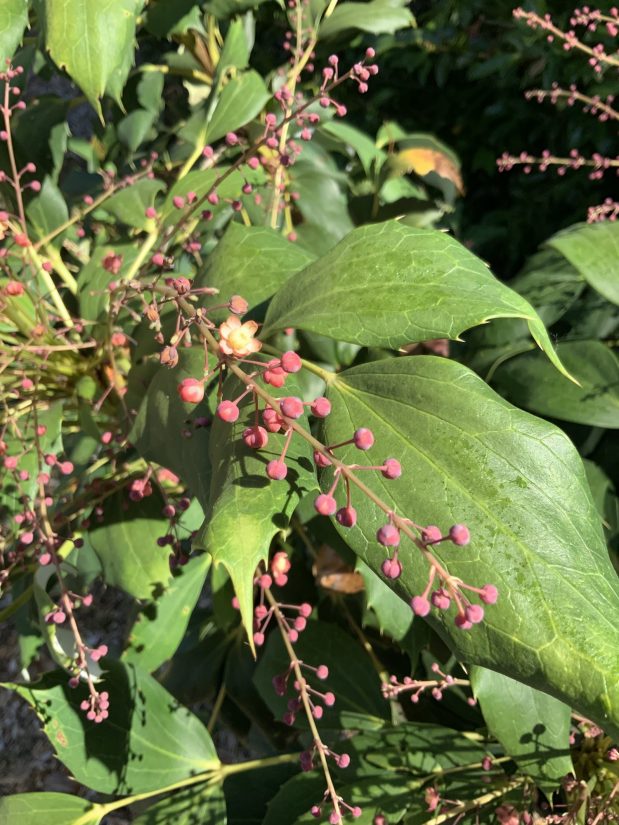 It has many attributes. While the leaves superficially resemble other Mahonia, Mahonia gracilipes features much larger leaflets that are fewer and more widely spaced. The leaflets range from 3-5 ½ inches long with only a few short teeth toward the apex. New growth is often bronzey and light green like many mahonias and are an attractive spring feature on their own. They mature to a pleasing blue-green color. But the undersides of the leaves make it truly unique. They are coated with an amazingly white, chalky bloom that wears away gradually over time (a year or so). While there is some variation among seedling populations in this feature, most of the ones in cultivation have been selected for this effect. The petioles are noticeable and reddish on older leaves, a color that can deepen to darker reds in the winter.

The flowers are another uniquely attractive feature. They resemble other mahonias in shape, but the color in Mahonia gracilipes is a multi-colored combination of light burgundy, red-orange, yellow and creamy white as opposed to yellow. Flowers occur in late summer rather than spring as in most other species. Blooms appear on long sprays over several weeks from early August into September. Flowers are followed by dusky grape-like berries, similar to our native species, and persist into the winter.

Mahonia gracilipes, sometimes called Chinese mahonia (though there are many other mahonia native to China), can reach up to 6’ tall in time with a 4’ spread. More commonly, it reaches 4’ tall. It is a suckering shrub, but not aggressive and easily checked. It does not wander far from the trunk and only occasionally at all. It is a moderate grower and in shadier conditions can become somewhat rank in habit over time, but unruly or wayward stems can be pruned back to another branch or to the ground. Wood is yellowish, drawing further comparisons to our native “Oregon grape” species. I have seen it growing in nearly full sun situations, though it appreciates summer water under those conditions. It takes on more reddish tints to the leaves with more sunlight. It seems most at home in partial shade. It can take more shade, but becomes more open growing and less tidy in appearance. 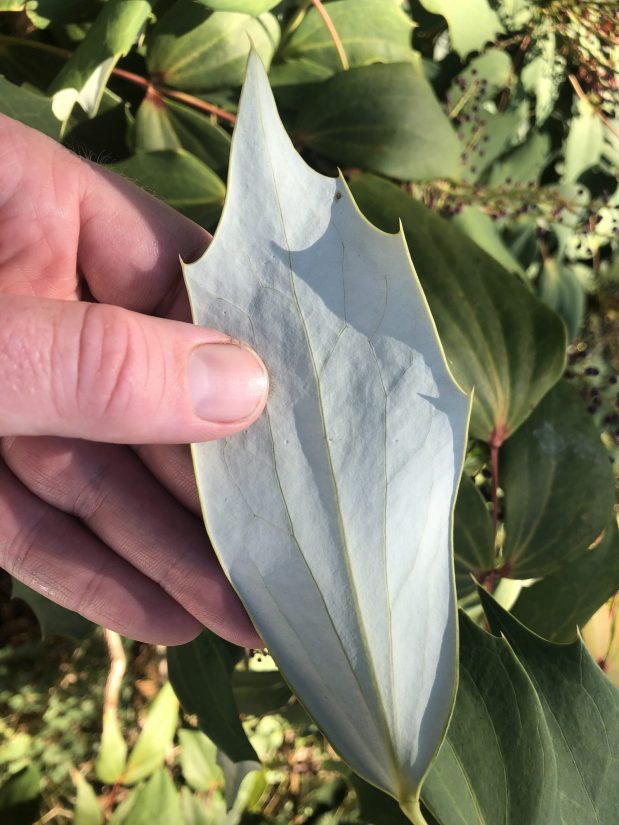 In the Arboretum, you can find several examples in the China Entry Garden in the Pacific Connections Garden (Grids 4-3E and 5-3E, south of the interpretive shelter), along the future China Forest section of the Arboretum Loop Trail in Grids 4-B, 4-1E and 3-1E and at the northeast corner of the Graham Visitors Center. Three specimens are at the west end of the Camellia collection, north of the path with the boulder cut steps bordering the New Zealand Forest in Grid 10-3E. Mahonia gracilipes is a common component of mid-elevation forests on Emei Shan in Sichuan Province. More will be planted over time in the Arboretum as the China Forest, referencing the flora of that mountain, is developed. It was once thought to be somewhat tender, but has survived temperatures to 5 degrees F in the Pacific Northwest.