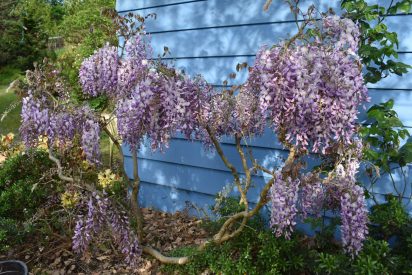 I’ve been told that the Wisteria about the Graham Visitor Center is blooming. I wouldn’t know as I haven’t seen them in over six weeks. Usually the abundant and fragrant blooms are something of a necessary reward for the hours and hours of work I put in during the year, once mid-summer, once in early-winter. Alas, I am staying healthy in Snohomish.

I do get a small taste of their beauty at home. When we moved into our home, there was a Wisteria planted next to the little gate to the backyard. The wee fence was nothing that was going to hold up a mature vine. It is recommended that the posts of a wooden structure meant to hold a Wisteria be at least 6”x6”. With all that needed doing in my new garden, I simply cut back the mass of tangles to deal with later.

I never got around to building any structure for the vine to grow over, but eventually I recalled a standard Wisteria at the Miller Garden. A standard in horticulture is simply a non-tree that has been pruned up on a clear stem to resemble a small tree. The standard Wisteria at the Miller Garden had been trained since it was planted and had an elegant form due to meticulous attention. My plant had missed the boat on the early training but I thought I’d give it a go anyway. 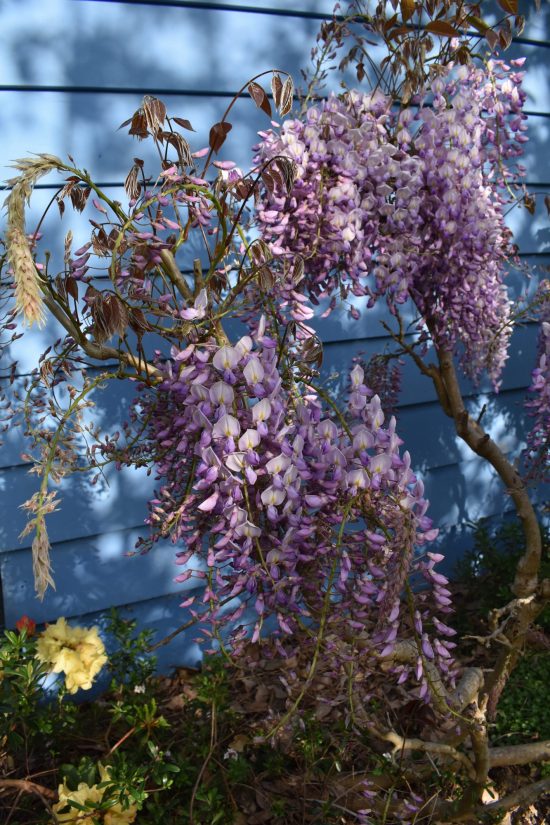 Instead of training the vine up a vertical post, which is the preferred method for giving your stem a balanced and solid platform to develop, I simply lifted a wandering vine off the ground and tied it to a stake at an angle I’ll call “upright”. From there it was the simple, yet regular task of snipping the long whips in summer to 3-7 buds and snipping again in winter to 1-3 buds. This type of pruning keeps the plant producing masses of flowers while minimally increasing in overall size. Management of this standard requires less than 30 minutes per year. When the support stake eventually rotted away I was happy to see the plant remained upright-ish. As you can see in the photos, the main stem has drifted down over time as the vine has grown larger and heavier. This is the result of not having properly trained the plant early in its life. But you can also see, new stems have sprouted along the main stem and those I have managed to keep vertical. In time I may choose to remove the original stem back to the newer,vertical growth.

My standard Wisteria will never be the same wonderful display as a large specimen. And had I purchased the plant myself I would have opted for a more fragrant cultivar. But for the ease of management and amount of floral display, a Wisteria standard is a stand-out.

One Response to “Wisteria Standards”