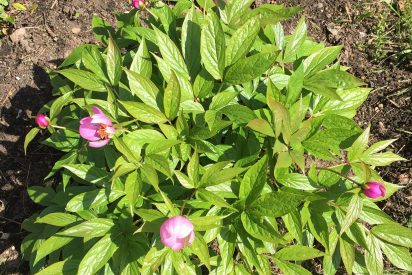 I first became acquainted with this lovely woodland peony almost a decade ago, seeing it offered at the Rhododendron Species Botanical Garden’s (RSBG) spring sale. I’ve long admired the species peonies, in part due to the attractive seed display in summer in addition to their flowers, but was not familiar with Paeonia mairei. Being a shade gardener at heart, I was also intrigued by its stated preference for less sun than what is usually seen as necessary for growing happy peonies. What caught my eye aside from its delightful single pink blooms was its young foliage, appearing in a shade of bronzy-red. It’s likely that talking to Steve Hootman, curator of RSBG, further convinced me, as he is a good salesman and was the reason that this species was in cultivation in the Northwest. He collected seed from it in southwest China in 1995. 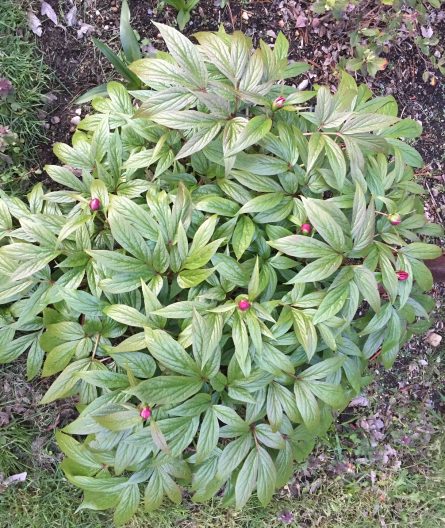 I purchased one small containerized plant to give it a try, planting it at the foot of a young paperbark maple, Acer griseum, which was starting to provide a little shade at last in my sunny back garden at home. I think I was still a bit skeptical of how much sun it would like, so decided to err on the bright side. A deciduous species, it did look a bit tired later in the summer in my well-drained soils and bright afternoon sun. But every spring it comes back stronger than before, and has steadily increased to where it is now a 2’ x 2.5’ clump, topped with more steadily more blooms. It is always a sign that spring has come at last, and the blooming season be in full force shortly. If it has been a milder winter, the blooms on Paeonia mairei arrive by late March and in a colder year always by mid-April. It generally flowers for a few weeks, and puts on a cheery, though not overpowering show. It has proven a trouble-free plant. It slips into dormancy by late summer and disappears for the winter. But the old stems remain visible unless cut back, and the bright new growth starts appearing by the end of winter.

From my home experience it can take at least a half day of sun, but more shade results in longer lasting foliage effects and likely the need for less water. My soils are quite sandy and the afternoon sun still quite bright, so I usually give it a quick drink once a week in summer— but less exposure and less sharp drainage should mitigate the need for water aside from longer dry spells.

It is regularly offered by RSBG, and Steve’s introduction can also be found offered by Far Reaches Farm. In the wild it is found in the mountains of central and southwest China, from 4,000 to 11,000 feet. In the past year I have acquired several for the Arboretum and look forward to seeing how they perform in the varied conditions in the woodlands there.