Magnolias, magnolias, magnolias! Where to begin?! These harbingers of spring have started to bloom! The Washington Park Arboretum has 250 magnolia tree specimens, with some impressively mature trees dating back to 1940. Lucky for us, the breadth and variety of the University of Washington Botanic Gardens’ collection means we should have a steady supply of magnolia blooms through the summer. 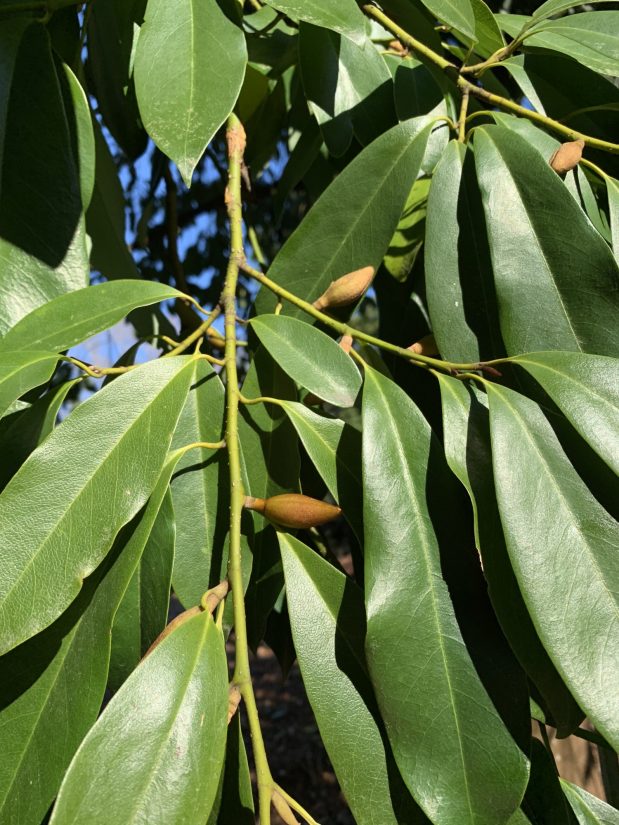 Of the 250 magnolia specimens, there are 38 species, subspecies and varieties (i.e. types of magnolias that occur naturally elsewhere and are being cultivated here in Washington) and 65 cultivars (i.e. magnolias that have been bred for horticultural use). Additionally, the UWBG is a member of the Magnolia Multisite Collection of the Plant Collections Network, along with 16 other botanical institutions. A shared guiding principle among botanical gardens is to represent and safeguard the diversity plants on earth. Members of the magnolia genus have a wide geographic range, originating from all over the world and thus growing in varied climates. Therefore, collaboration between institutions is integral to successfully representing and conserving the diversity of the world’s magnolias here in North America. There are also international collaborative efforts to further the conservation of magnolias worldwide. As of 2016, as many as 47% of all magnolia species are threatened with extinction in the wild, making this collaborative work vital in protecting the genus. While plant diversity truly should know no borders, the three countries with the most species of magnolia are China, Vietnam and Colombia. Most of the magnolias growing at the Arboretum are of garden origin, or native to Asia and North American, with a few South American natives represented.

In addition to their horticultural, medicinal, and timber value, magnolias have an interesting evolutionary history. They are an ancient lineage of plants; fossils specimens of magnolia relatives have been found dating back to 95 million years ago. Not quite as ancient as gingkos, though, with fossils dating back to 270 million years ago. Magnolias were once thought to be the earliest flowering plants (angiosperms), due to the resemblance between their female reproductive structures and the cones of gymnosperms. However, this is not the case. Research discoveries made in the 1990s and 2000s provided clarity on the evolutionary relationships of magnolias and relatives. While magnolias still belong to an evolutionary old group of angiosperms, they are surely not the first flowering plants. The University Washington’s own Dick Olmstead contributed research to resolving the position of magnolias and related groups within the larger scheme of angiosperm evolution. It is hypothesized that because magnolias evolved before bees were present on earth, their flowers are meant to attract pollination by flightless beetles.

A particularly nice Magnolia with blooms to look forward to is Magnolia ernestii, common name Yellow Lily Tree. It can be found growing in two locations in the Arboretum:  one (accession 28-08-A) at the Chinese Entry Garden in Pacific Connections, just north of the interpretive shelter and the other (25-98-A) in the core Magnolia Collection area in Grid 26-3E.  Magnolia ernestii is an evergreen magnolia that can grow to 25 meters tall with delicate yellow to white flowers emerging mid spring. It is native to the mountainous wet forests of Western China (2000-6000 meter elevation, Chongqing, Guizhou, SW and W Hubei, Hunan, Jiangxi, C, S, and W Sichuan, NE and SE Yunnan). Magnolia ernestii, then called Michelia wilsonii, was first made available to North America in 1993 by Piroche Plants in British Columbia. The one growing in the China Entry Garden has thrived since it was transplanted as a 20-foot tree in 2008 from a private residence in Seattle.   The other came in as a younger plant from Piroche Plants in 1998. 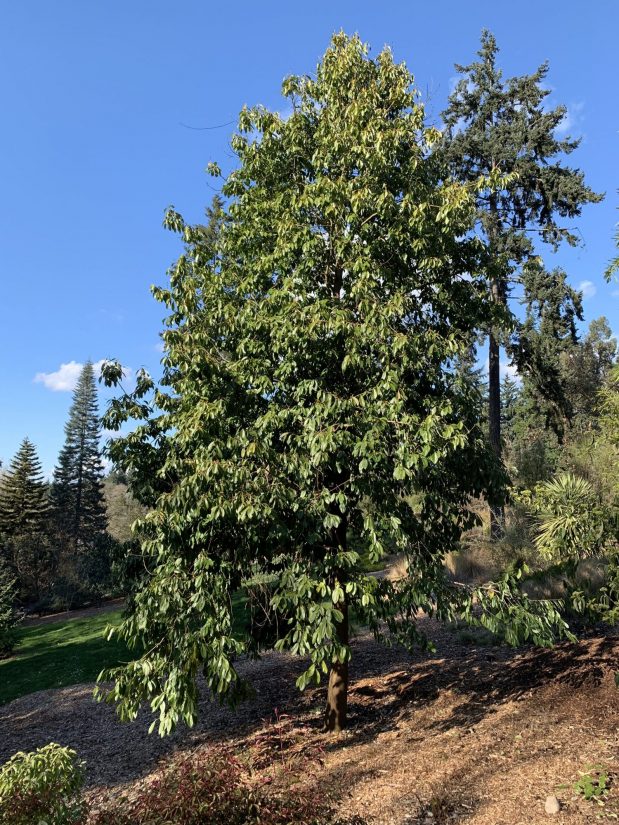 This species has been plagued by name changes. It was first named Michelia wilsonii in 1906, to commemorate renowned botanist and plant explorer Ernest Wilson (1876-1930). However, advancements in DNA sequencing and other research suggest that evolutionary relationships would be more accurately represented if the genus michelia (first named by Linnaeus in 1753) was lumped in with the rest of the magnolia genus. One distinction between the michelia and magnolia groups is that unlike magnolias, that have a single flower at the end of a given branch, michelias have many flowers along a single branch. It turns out that this difference is superficial, in fact the blooms on a michelia are technically also single flowers at the end of a teeny tiny branches. Ah systematics! Between the initial naming of Michelia wilsonii in 1906 and the lumping of michelia and magnolia in 2000, another magnolia was named in honor of Ernest Wilson, Magnolia wilsonii. So, the name change from michelia to magnolia would mean two plants with the name Magnolia wilsonii– which would defeat the purpose of having a name at all. Do you have a headache yet? The scientist who did a lot of this taxonomic work, Richard Figlar, wanted to continue honoring Wilson for Michelia wilsonii. He decided to use Wilson’s first name, Ernest, giving rise to the current name: Magnolia ernestii. Wilson is likely one of the few (or only) botanists to have two plants in the same genus named after him. He is also largely credited for introducing thousands of East Asian species to the US and spurring western interest in East Asian culture and botany, so perhaps it is fitting.

Go check out Magnolia ernestii! It should be blooming April to May.