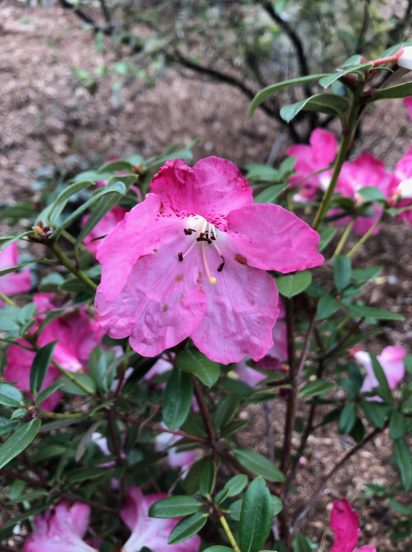 One of the earliest flowering rhododendrons in bloom each year, Rhododendron moupinense is a compact evergreen delight that deserves wider use in gardens.  While the species itself is too infrequently seen, it has been widely used in the hybridization and breeding of many early hybrids including the widely grown Rhododendron ‘Cilpinense’ (with R. ciliatum as the other parent) and R. ‘Bric-a-Brac’ (with R. leucaspis), R. ‘Seta’ and R. ‘Tessa’.  As a species Rhododendron moupinense can be somewhat variable in bloom color, with white, and shades of pink ranging from light to dark, sometimes spotted with purple or crimson.  It is a compact, slow grower, particularly in sunnier conditions, reaching 2-4 feet high and wide in time.

In the Seattle area, Rhododendron moupinense typically blooms from early-February to mid-March, and is at its peak now.  Although blooms are occasionally damaged by very cold temperatures (for us, the mid-lower 20s), the buds are undamaged and will continue to open after temperatures warm up.  Buds are noticeably swelling by mid-January and are a sure sign that days are brightening.

Rhododendron moupinense is remarkably tolerant of a range of conditions, being cold hardy to 0 degrees F, and tolerant of bright conditions and periods of drought.  It keeps a compact shape in sunnier conditions, only disliking long periods of hot afternoon sun, and will be leggier and less dense in deeper shade.  New growth emerges in an attractive bronze color, and the leaves are noticeably hairy until later in the season when they turn a medium green.  It is a profuse bloomer.

Native to the higher elevations of Sichuan, Guizhou and NE Yunnan provinces of China, the species epithet refers to an older name, Moupin, for Baoxing County in what is now central Sichuan.  It can be epiphytic to evergreen oaks and broad-leaved trees but also grows on rock and cliff faces.  It was botanically described and named by Père Armand David in 1869, but not introduced into western cultivation until 1909 when Ernest Wilson collected it for the Arnold Arboretum.  It is currently listed as Near Threatened in the wild due to its scattered distribution of small populations and increasing agricultural and deforestation pressures.

At the UW Botanic Gardens they are seen in two locations.  The most prominent is a planting of several deeper colored selections (Accessions 18-14 and 32-13) in the Dorothy McVay Courtyard at the Center for Urban Horticulture.  These are plants that were selected and bred for darker flowers by Chimacum Woods, Rhododendron specialists near Port Ludlow, Washington.  The buds are quite dark, and the flowers are rich shades of very dark pink verging on red.

In the Arboretum, we have currently have one specimen (Accession 30-03-A) that features the more typical light pink buds that open to white and light pink flowers.  This is at the head of Rhododendron Glen, near the wooden sign at the south end of Parking Lot 4 on Arboretum Drive E in grid 11-7E, and is a selection from the Rhododendron Species Botanical Garden in Federal Way.

Both of these specialty nurseries are good sources for Rhododendron moupinense and both are scheduled to have many species of rhododendrons for sale at the annual Northwest Horticultural Society Spring Plant Sale, occurring this year at the Center for Urban Horticulture from 9am-3pm on Saturday, March 7.  Proceeds support the Elisabeth Miller Library at the UW Botanic Gardens, so be sure to stock up on early-spring blooming plants. 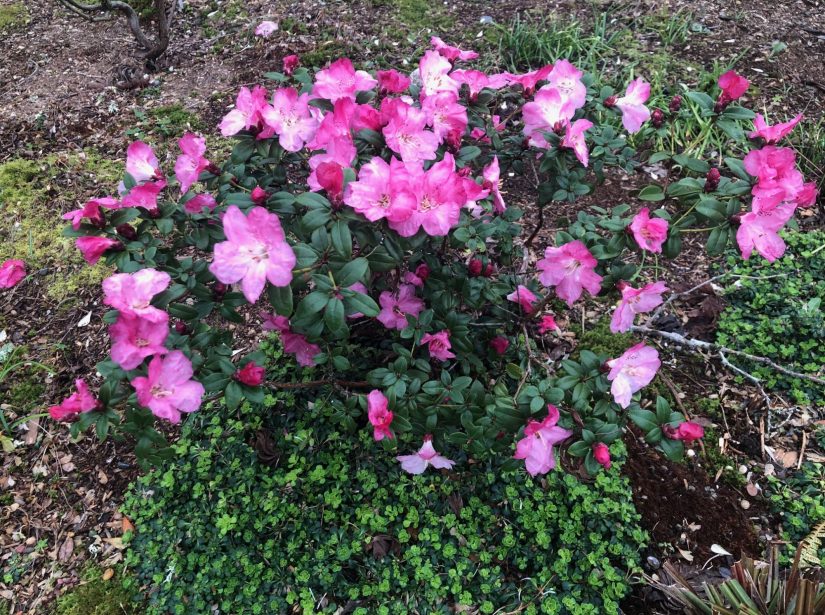 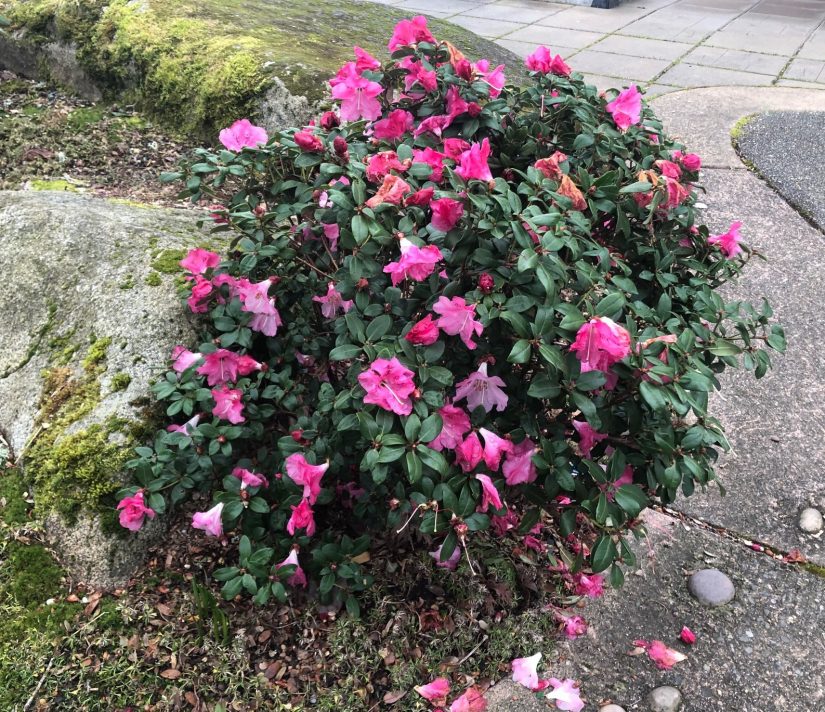