Having grown up in northern California, I came to the Seattle area with a treasured tree in my heart and could quickly answer the “favorite tree” question commonly asked in horticultural gatherings. Though my neighborhood was a bit inland and to the south of the coast redwood range (and so was surrounded by majestic oaks most of my days) it was the stunning Sequoia sempervirens forests along the northern coast where I hiked and camped which I considered iconically and perhaps spiritually my home.

Arriving in Seattle, I was happy to find that my favorite tree was well represented within the Washington Park Arboretum. There are many specimens of several cultivars located throughout the park. The awl-shaped needles of coast redwood are typically deep green. Cultivars exist with color ranges from bright green of Sequoia sempervirens ‘Soquel’ and ‘Santa Cruz’ to blues of ‘Henderson’s Blue’ and ’Aptos Blue’ to the silvery blue of ‘Simpson Silver’. True dwarf cultivars are rare of these giants. The common cultivar S. sempervirens ‘Prostrata’ can be pruned annually to maintain horizontal growth, but failure to remove the new year’s vertical shoots will eventually result in a 60 foot tree. Another interesting cultivar is ‘Adpressa’ which is known for tightly held needles (adpressed) and white-tipped new growth.

Through fossil data, we know that Sequoia sempervirens used to grow throughout the northern hemisphere. In fact, like Metasequoia– a close relative, Sequoia was known to archaeology through fossils before it was discovered living on the California coast by westerners.  The oldest known fossils date back 200 million years to the Jurassic period.

Before commercial logging began, the range of the coast redwood had shrunk to approximately 2 million acres, from south of Big Sur in California to north of the Oregon/California border, hugging the Pacific coast. The changing climate is the likely reason for the diminution in range as it cannot tolerate extremes in heat or cold, nor dry weather. The coast redwood is now listed as “Endangered” by the International Union for the Conservation of Nature (IUCN) due to habitat loss and commercial use. The wood of coastal redwood is highly rot resistant and is used in the construction of many outdoor structures including decks, shingles, hot tubs and patio furniture.

Conservation efforts date back to the Gold Rush days, when logging ramped up to support mining and infrastructure during the rush to strike it rich in California. Today, Sequoia sempervirens enjoys a great deal of support from the public and legislature. And while quantities of its old growth range have been purchased by conservation organizations and the state, its population continues to decline.

The coast of California, due to the Pacific Ocean, provides a well moderated temperature range throughout the year, plenty of rainfall in the winter and abundant dense fog through the summer months. The leaves of the tree can adsorb some water directly and the fog condenses upon the needles, creating its own rain for its roots. A study of the effect of fog within redwood forests can be found here: https://www.savetheredwoods.org/grant/fog-and-redwood-forest-plants/

Sequoia sempervirens appreciates deep, humus-rich, acidic, moist soils. Though tolerant of light shade, the tree performs best in full sun. In its native range the coast redwood can grow a foot per year as a sapling, increasing to three feet per year. Trees grown in a garden or park setting require some summer irrigation to simulate the fog capture of their natural habitat. Due to its growth rate and ultimate size, this species needs ample space to grow both vertically and horizontally.

The tallest trees on the planet are coast redwoods, with the list of trees taller than 110 meters growing each year. The tallest known tree on the planet is a coast redwood named “Hyperion” measuring 115.85 meters (379 feet!) tall in Redwood National Park. Outside of its native range the tree will not reach its full potential. A typical height for garden-grown trees would be around 30 meters, though trees grown on Rotorua, New Zealand have been measured at 70 meters and more. Sequoia sempervirens, not surprisingly, are also some of the oldest single-stem trees on the planet. Multiple specimens have been sampled and dated to more than 2,200 years old.

Sequoia sempervirens have the ability for epicormic (dormant until needed) buds to break from the trunk of the tree. If trees are killed by fire or harvested by logging, the large buttress stumps will sprout around the edge forming “family rings”. On older trees, new trunk stems may shoot from lateral branches forming a multi-trunk canopy 60 meters above the ground. These canopies can be so large that complex ecosystems develop within, including soil development, nutrient cycling and plant and animal communities.

I have come to appreciate many other trees and plants since coming to work at the UW Botanic Gardens and this has certainly muddied my answer to “what is my favorite tree?”. There are so many awesome and fascinating trees not only in the world, but simply outside your door, living here in the Pacific Northwest. But it can truly be said that Sequoia sempervirens is a tree that cannot be overshadowed.

Location in Arboretum: Grid squares 21-6w along the south Pinetum trail, 39-6w and 40-6W in the Pinetum next to the playground, 13-5E in Rhododendron Glen, single specimens in the Witt Winter Garden and near the Graham Visitors Center

Habitat: Cold Hardy to zone 7, but limited in natural range due to special climatic needs

The genus name of Sequoia is commonly attributed to Sequoyah, a Cherokee chief and creator of the Cherokee alphabet, though no clear etymology exists of the name. The specific epithet sempervirens usually refers to being evergreen, but for this species the interpretation “forever living” might be more apropos. 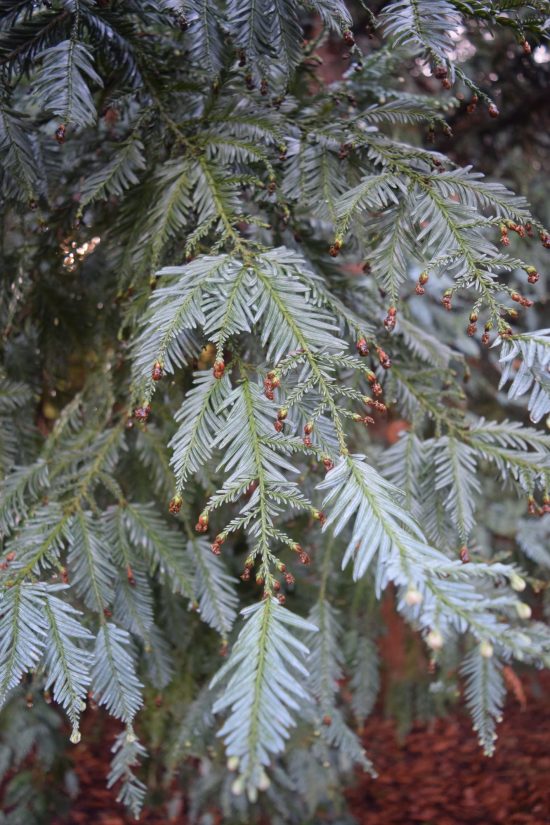