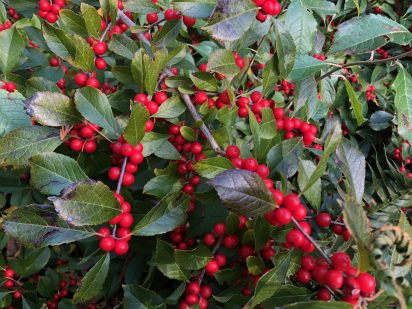 Ilex verticillata ‘Nana’, typically sold as ‘Red Sprite’ or under the trade name RED SPRITE, is a dwarf winterberry cultivar that is an outstanding choice for late fall and winter landscapes, especially for those with limited space.  The bright red berries are produced in abundance and are its outstanding ornamental feature. Unlike most winterberries, which can reach to 5-8’ high and wide or more, ‘Red Sprite’ is only 2’ to 3’ tall and wide at maturity.

This holly species is native to wetter areas of eastern North America, and is less frequently seen in Pacific Northwest landscapes. Unlike most hollies in our area, it is deciduous. The leaves are medium to dark green and only lightly toothed, and at first glance it appears unlike what most of us associate with hollies. The leaves are pleasant in their own right, but the flowers are fairly inconsequential. It is the berries and the great abundance of them are the primary reason to grow this plant. The berries are attractive to birds, but at least in busier or more urban settings, they are not readily foraged so they often remain on the plant all winter long. In ‘Nana’, the berries are larger, and although dwarf in size it still has an upright, mounded habit.  The show begins in October while the leaves are still on the plant and continue once leaves have been shed later in the autumn.  The berries are especially effective clothing the bare stems through the winter months.  And the plant does not seed around or spread like the ubiquitous English holly, Ilex aquifolium. 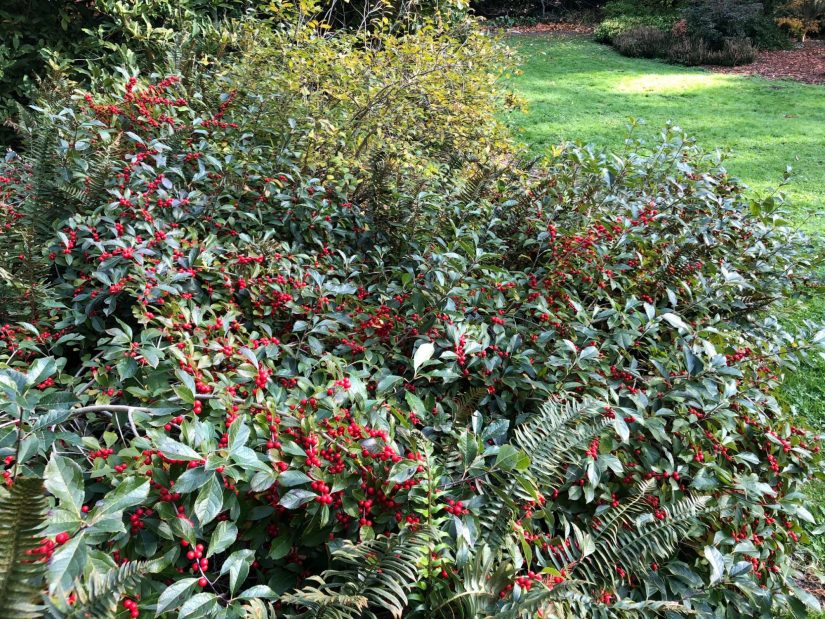 Like all hollies, Ilex verticillata is dioecious, meaning that there are male and female plants.  Both sexes must be present nearby for fruit set, so it is important to also have a male parent nearby.  Male plants are propagated as clones and sold strictly for the purpose of pollinating female plants.  Like some members of the natural world, the males are much less attractive than the females of the species (and have no berries), and the male clones are often confined (with reason) to the background.  The selection that we have used to provide pollination services is called Ilex verticillata ‘Jim Dandy’. It is also somewhat compact, and is a reliable pollinator. One male will typically be enough to provide effective pollination for 7-10 plants.  You can see ‘Jim Dandy’ in the immediate background in some of the photos.

Ilex verticillata ‘Nana’ is easy in cultivation, and grows in both heavy and light soils that are medium or wet, and somewhat acidic.  However, like many plants it is happiest in better soils.  It performs best in full sun or light shade.

Location: In the Arboretum, it is best seen in the Witt Winter Garden, where a group of 5 are prominently seen growing together at the southern portion of Bed F in grid 35-1E.  There are also three in grid 12-3E on the south slope of the lower reaches of Rhododendron Glen.  But these are in more shade and not as prolific in fruit. 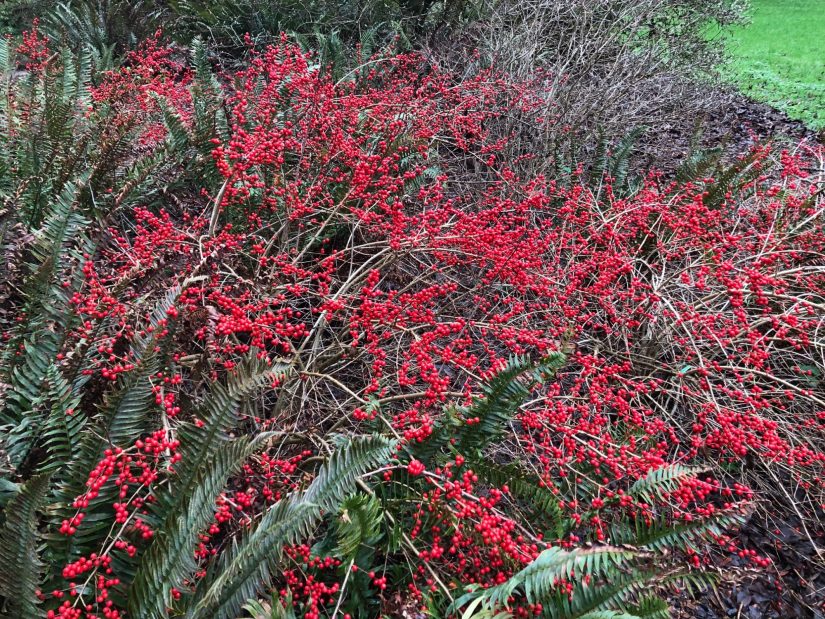