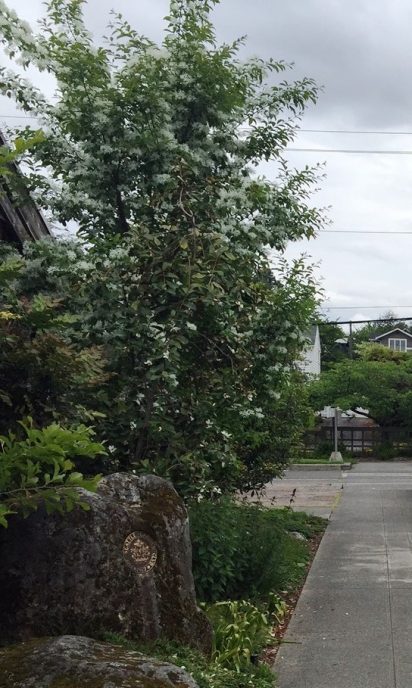 Chionanthus retusus, commonly called the Chinese fringe tree, is another showy member of the Olive family that has been undeservedly overlooked for broader landscape use. However, this seems to be slowly changing. The collections at the UW Botanic Gardens Center for Urban Horticulture are a good place to make your acquaintance with this charming 3-4 season tree and some of the available cultivars.

Our main specimen has been part of the Seattle Garden Club’s Fragrance Garden since 2007, and in that time has developed into a prominent small tree. It is growing on the east side of the Northwest Horticultural Society (NHS) Hall.  There are several attributes of the species that make it deserving of wider use.  The most notable year-round feature is its attractively peeling brown bark. Not quite as shaggy or cinnamon-colored as the paperbark maple, Acer griseum, it is nonetheless remarkable.  The addition of an amazing abundance of small strap-shaped white flowers in late April through mid-May is a very ornamental feature and seems to get better with age.  Flowers are lightly fragrant and held in upright panicles. This year, the effect was almost overwhelming. The plant was covered in so much bloom that the leaves were barely visible for a time.  The bloom is intense and rather fleeting.  The foliage is attractive, being somewhat variable from ovate to nearly round in shape. Autumn color is a pleasant yellow.

The main requirement for growing Chinese fringe tree successfully in our region is a sunnier spot and occasional summer water. Our specimens are lightly irrigated in the summer and they seem to thrive on this. Established specimens would likely only need a good watering a few times during our arid summers to look their best. Otherwise, it is relatively trouble-tree and reputedly quite pollution tolerant.  That, combined with its relatively small size—to 20’-30’ tall in cultivation if grown as a single stemmed tree—makes it a promising urban tree.

Chinese fringe tree is native to a fairly wide area in central and southern China, as well as Japan, Korea and Taiwan. In the wild Chionanthus retusus can be a large multistemmed shrub, but cultivated forms are generally seen as single trunk specimens. Plants are generally either male or female, but some have perfect flowers (having both stamens and carpels). Fruit is set if more than one tree is present of opposite sexes. Our main tree is a symmetrical, single trunk form, as are our two new plantings of cultivated varieties.

Due to the success of our original tree, and the desire to trial new underutilized tree varieties to replace our aging and declining cluster of Styrax obassia (fragrant snowbell) in the Soest Garden, we sought out available cultivars. The first is ‘Tokyo Tower’, which is a very upright selection, reputedly spreading to 4-8 feet wide, or about half to a third as wide as the species. We planted two examples in Bed 7 of the Soest Garden. The second variety is a selection from the Arnold Arboretum of Harvard University, called ‘Arnold’s Pride’. This cultivar is self-fruiting and faster growing to 25’ tall x 25’ wide, and features blue-black fruit in the fall. We planted one just south of the walkway bisecting the Soest Garden, opposite Bed 7 and the other in Bed 1. We are excited to see how they mature and compare to the straight species.

Currently there are no examples of Chionanthus retusus in the Arboretum, but we plan to plant examples in the future. We have a few examples of the common fringe tree, Chionanthus virginicus, which is native to the eastern United States, growing in the Arboretum. The most easily seen are those in grid 29-3W along the east side of the Arboretum Loop Trail. This is the more widely seen species, especially on the east coast and in public gardens, but is generally a shrubby and much smaller plant.  It typically blooms a few weeks later than Chionanthus retusus. 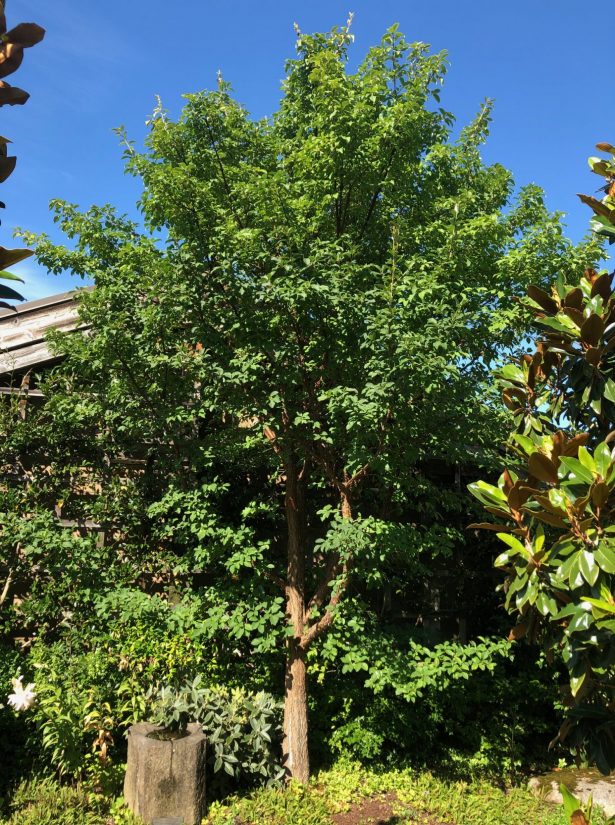 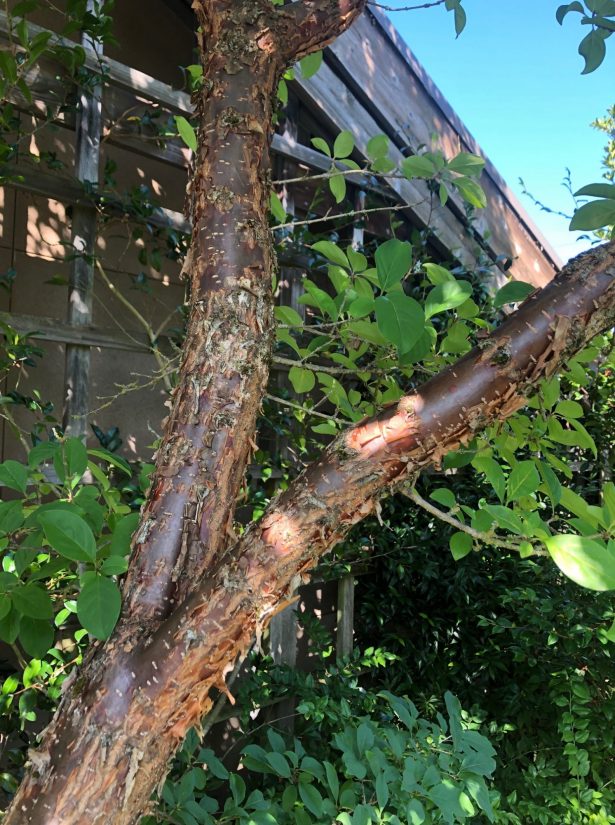