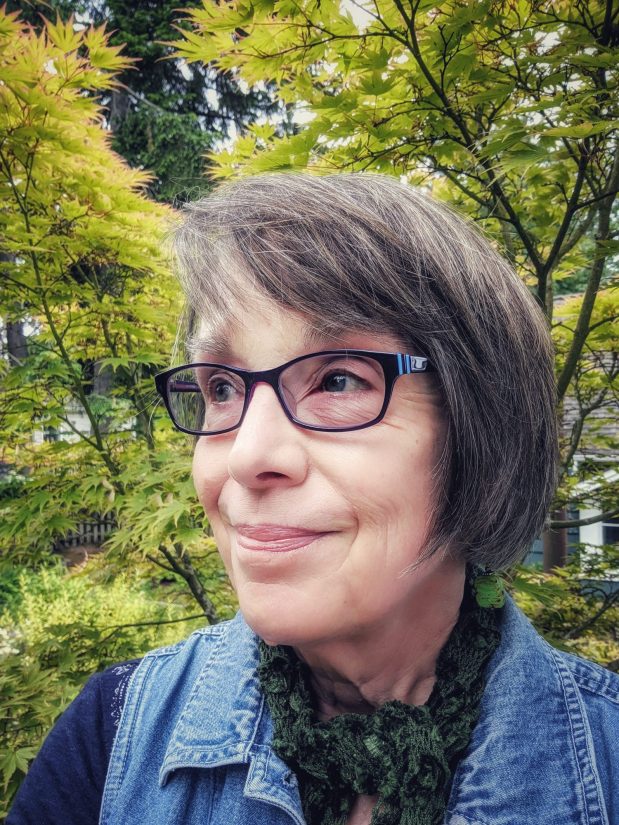 Corinne Kennedy was not an early-blooming gardener. As a teenager, she was adamant that her parents couldn’t make her do “yard work.” Fortunately, after buying her first house years later, she discovered that gardening was a great way to relax from her coordinator position at Metro Transit. It was a “good job,” but the realities of sump pumps, exhaust fans, and other equipment were far removed from her interests, passions, and education (a Whitman College BA in English Literature, and a University of Washington BA in Women Studies).

Gardening also evolved naturally from her love of hiking in the Cascades and Olympic Mountains – particularly backpacking in pristine alpine areas such as the Enchantment Lakes. In a few years, she left her Metro Transit job to study horticulture and landscape design, resulting in an AA degree from Edmonds Community College. Inspiring instructors included Walt Bubelis, Richie Steffen, and Polly Hankin. During this time, she also worked in the woody plants sections of Wells Medina Nursery, which served as a kind of apprenticeship, complementing her studies.

By the late 1990s, she began working independently as a gardener and as a garden consultant and designer, while continuing to work part-time at retail nurseries. As a nursery tree and shrub buyer, she took pride in maintaining up-to-date knowledge of the newest available species and cultivars, and in improving the nursery’s selection of woody plants.

After retiring, Corinne has maintained her passion for plants and gardens by volunteering with UW Botanic Gardens, first in 2013 as a docent at the Seattle Japanese Garden, and beginning a year later, at the Elisabeth C. Miller Library. She currently assists librarian Jessica Anderson with tasks related to the library’s serials subscriptions – scientific, professional and gardener-oriented journals and magazines. At the Seattle Japanese Garden, she’s a member of Arboretum Unit 86, leading public tours and serving on the committee responsible for maintaining the garden’s plant inventory and developing plant classes for interested guides. She is also co-coordinator of the Unit 86 reading group, and since 2015 has been a regular contributor to the garden’s website blog. Most of her articles are about plants in the garden – not only horticultural information but also their uses and meanings in Japanese culture and garden design. In addition, she has written several articles for the Arboretum Bulletin. Since 2016, she has also been volunteering with Kaiser-Permanente Hospice.

Today, Corinne is still an avid reader – especially works on horticulture, garden design, nature more generally, history and politics. In fiction, her taste runs to “Nordic Noir,” including writers from Iceland, Norway and Sweden. She enjoys hiking, traveling, and gardening in her own quarter-acre garden in West Seattle.